The Highlands Controversy – Understanding The Geology

The progress with understanding the geological structures and processes that took place in the part of the crust that is now the NW Highlands was not gradational, but rather went in bursts with the major progress being made in the 1880’s. The resolution of the controversy at that time was the result of meticulous fieldwork by gifted geologists. The Murchison view eventually fell quickly, principally initially due to the work of C. Callaway, C. Lapworth and then from the Geological Survey – principally B. Peach and J. Horne followed by a small team including L. Hinxman, H. Cadell, W Gunn, C. Clough with petrology by J. Teall. The scale of what the full survey team undertook was staggering, arguably the most impressive piece of team fieldwork undertaken in any era and at times in such enormous detail. They divided the area up and mapped sections, often with more than one geologist contributing toward the final map. They started in the north at Loch Eriboll, which provided the major development in the concepts and worked south to the Isle of Skye, taking until 1897.

It wasn’t just the Moine Thrust Zone (MTZ) they mapped but also the complexities of the whole area, including the Lewisian Gneiss. The maps they produced were reproduced for a project called Mapping Mountains in 2007, which celebrated the centenary of the final 1907 full memoir. Some of these maps are on display at the Rock Stop which is a centre for the North West Highlands UNESCO Global Geopark. At one time they were also available online and will hopefully reappear soon. These aesthetically pleasing maps have stood the test of time and whilst a major resurvey, almost a hundred years later, updated some aspects, they remain largely unaltered. The Ordnance Survey had produced the base maps, but they were not in much detail and the geologists had to add their own contours as they went along from some spot heights that were provided. The memoir of the Geological Survey of 1907, Geological Structures of the North-West Highlands of Scotland was the major work that accompanied the maps and followed on form an initial statement of progress printed in 1888.

The maps and sections produced during this period allow for representation of the geology in 2 dimensions. To help understand the structures in 3 dimensions, a limited edition of 3D plaster models of the Assynt area were commissioned.

Assynt was probably chosen as this is where the internal structure has been exposed by erosion into a bulge in the Moine Thrust Zone and a Guide To The Geological Model Of The Assynt Mountains  was written for the model by Benjamin Peach and John Horne of the Geological Survey in 1914.

One model is in the entrance to the Grant Institute at Edinburgh University and another will hopefully be displayed within the Geopark at a new geocentre to be built at Scourie.  Photos of the plaster models were supplied by Scourie Community Development Company.

Today the British Geological Survey also have a digital 3D interactive model of the Assynt area called The Assynt Culmination which is presented in PDF format to view and download from their website.

Selected sections of the plaster model are available to view below :-

One of the original Geological Survey team, Henry Cadell, having produced some very detailed maps in the Loch Eriboll and Fionaven areas, early in the mapping enterprise, turned his mind to trying to simulate the structures that he was seeing. He built a long wooden box to squeeze layers of sediment and plaster to see what he could simulate. He wasn’t trying to produce any particular part of the real geology he saw, but rather to see whether the types of structures could be produced by materials that behaved in slightly different ways. Some materials responded by flowing in a plastic manner and others fractured. In the field whole layers can behave in these different ways and under the microscope it can be seen that different minerals behave in these different ways in different conditions. It was believed at this time that the thrusts only followed on after very tight folds. His experiments showed that was not true. 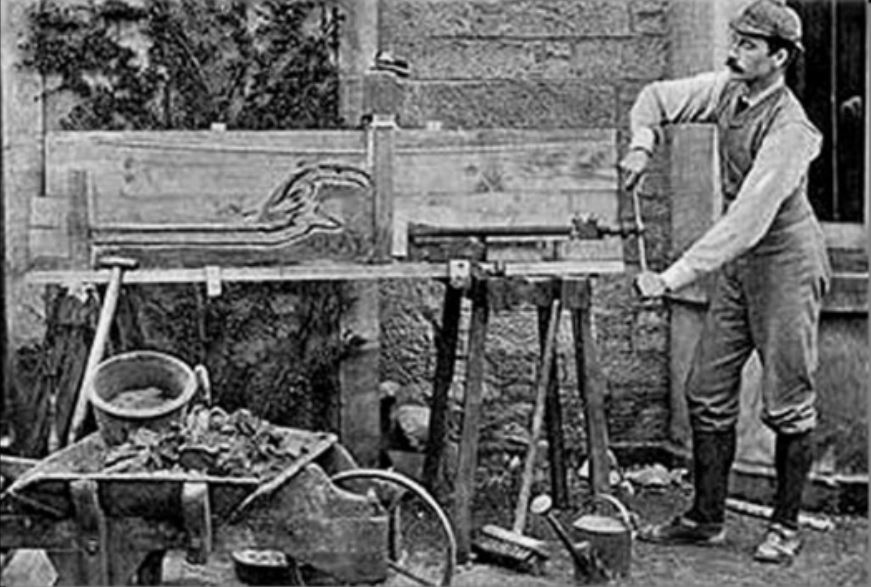 … and the results of thrust faulting in 1890 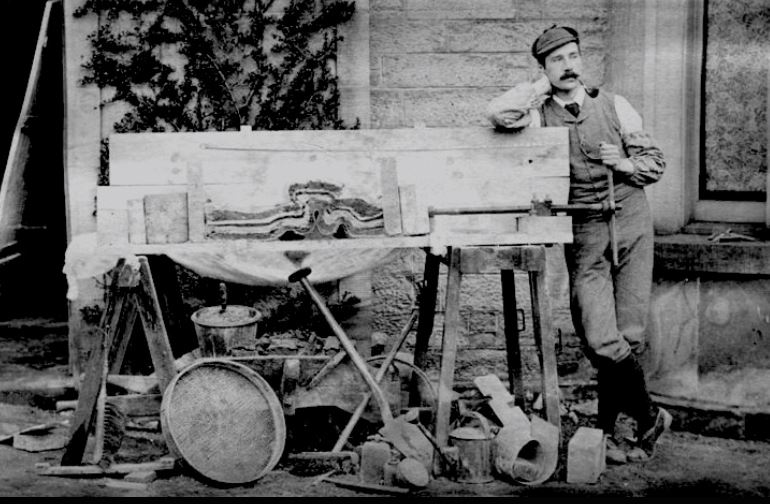 Those who worked from the 1880s onwards (and Nicol to a degree) appreciated that the geological structure of the Moine Thrust Zone is the most complex in the UK, from the large scale (whole hillsides) right down to the small scale (hand specimen and microscope thin sections). What happened in this relatively narrow zone produced different styles of deformation to accommodate huge crustal sliding movements, in excess of 100 km in total. Sometimes huge folds bent rocks back on themselves and turned some sequences completely upside down, in other places narrow flat lying planes of slippage stretched and fragmented the rocks at a mineral grain level to form a milled up rock called mylonite and in other places multiple, closely spaced steep faults produced stacks of repeated rock layers called imbricates or duplex zones.

Peach and Horne led an excursion of the British Association for the Advancement of Science to Assynt in 1912 with many leading geologists of the day, including those from other European countries and the USA. They demonstrated to the visitors many of the conclusions that they had come to regarding the structure of the MTZ and the processes that formed it. The area was hence of great interest to the geological community. 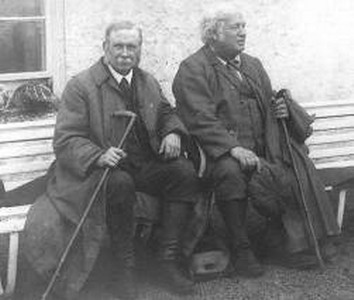 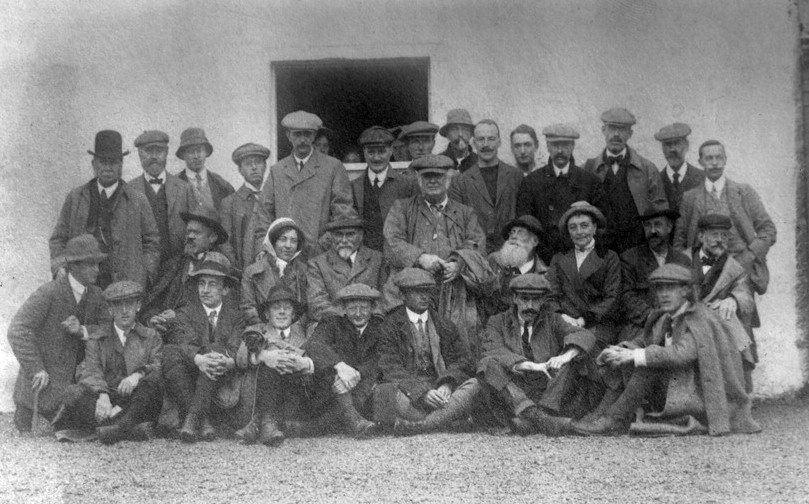 Research into the Moine Thrust Zone became a bit of a back water for quite a while, partly possibly due to the major advances there had already been, which may have made it difficult for new research to have an impact. The 1980s brought a new generation of structural geologists, with some new techniques and insights at a time after plate tectonic theory was developed and had explained the origins of the vast horizontal forces necessary to produce the Moine Thrust Zone. In 2007 a conference was based at the Macphail Centre in Ullapool, undertaking the field days within the Geopark. It brought many structural geologists, from all over the world, together for a week to celebrate the legacy of Peach and Horne, who were key in producing the 1907 memoir. It was organised by the Geological Society of London. The 7th European Geopark’s Meeting and Conference also took place at Inchnadamph and Ullapool in 2007, bringing many from the Geoparks around European to pay tribute.

Nature Scotland (Scottish Natural Heritage) celebrate the controversy story at their National Nature Reserve at Knockan Crag. There is a circular trail with great views, a chance to see the rocks involved, and a free exhibition. This is well worth a visit. There is also a Rock Route of 14 landscape interpretation panels along the driving route NC 500 explaining the  various landscape features of the Geopark.

Come and see the rocks that have inspired generations of geologists and contributed to the training of many of today’s professional geologists. There is much to see within the Geopark.

One of the Geopark guided tours each year concentrates on how the controversy developed and visits some of the key sites that influenced the developments.

Click on the link for more details on the Highlands Controversy Geotour.

If you have some experience of geology already then a self-guided tour may be possible using a guide such as A Geological Excursion Guide to the North-West Highlands of Scotland, EGS and NMS ISBN 978-1-905267-53-8

Another useful guide concentrates on the Moine rocks, An Excursion Guide to the Moine Geology of the Northern Highlands of Scotland, EGS and NMS ISBN 978-1-905267-33-0

There are many further sources of information to help understand the geology of the area and the controversy. There is active research taking place They are written for different levels of pre-knowledge, with many being available free online

David Oldroyd (1990) The Highlands Controversy: Constructing Geological Knowledge through Fieldwork in Nineteenth Century Britain, University of Chicago Press ISBN 0-226-62635-0. A very comprehensive book which gives much of history behind the controversy and the contributions made by a wide range of geologists.

Malcolm Rider and Peter Harrison (2019) Hutton’s Arse: 3 billion years of extraordinary geology in Scotland’s Northern Highlands, ch 2: ‘Deep Scar: The Moine Thrust – the story of a bitter scientific controversy’, Dunedin Academic Press ISBN 978-1-78046-093-2. The other chapters include information on other issues related to the geopark area and beyond in the NW Highlands.

HM Cadell (1886) The Geology and Scenery of Sutherland. Edinburgh: Published for the Sutherland Association and part of the Sutherland Papers series : a simple guide by a key player

A Harker  (1941) : The West Highlands and the Hebrides, A Geologist’s Guide for the Amateur published by Cambridge University Press

R.D. Law, R.W.H. Butler, R.E. Holdsworth, M. Krabbendam and R.A. Strachan Editors. Continental Tectonics and Mountain Building – The Legacy of Peach and Horne, Geological Society Special Publication 335 ISBN 9-781862-393004. This is a publication that collates the papers form the 2007 conference in Ullapool and Geopark. It consists of papers written by academic geologists and hence should be treated as reading when you feel ready for more technical challenges!!

Peach, B. N., Horne, J., Gunn, W., Clough, C.T., Hinxman, L.W. and Teall, J.J.H., Cadell – communicated by Geikie A. Director General. Report on the Recent Work of the Geological Survey, in the North-west Highlands of Scotland based on the Field-notes and Maps. Quarterly Journal of the Geological Society for August 1888. This is the paper that acted as a summary of the initial fieldwork in the MTZ. It gives some of the early thinking about the dynamics that took place in thrust zones as well as summarising the geology of the whole area. A full recognition of the contribution of geologists who worked in the area prior to the survey team is recognised and appreciated.

B Peach and J Horne (1930) : Chapters on the Geology of Scotland published by Oxford University Press