Murchison had every reason to speed north again in 1855 after he had been contacted by a Caithness man, Charles Peach, who had found some fossils in the limestone at Durness. There were not many, and they were of a poor quality, but he thought they might provide some clue as to the geological age of the rocks there. The study of fossils, or palaeontology, was the principle technique for assessing the age of rocks at that time. One reason why it took so long to establish the succession of rocks in the north-west was because of the scarcity of fossils in the area. Murchison himself had used the fossil evidence successfully in Wales, and he must have hoped for a similar breakthrough further north as he hastened to meet Charles Peach. At the back of his mind, he probably allowed the thought that he, the King of Siluria, could extend his empire into his ancestral homeland, the north-west of Scotland. 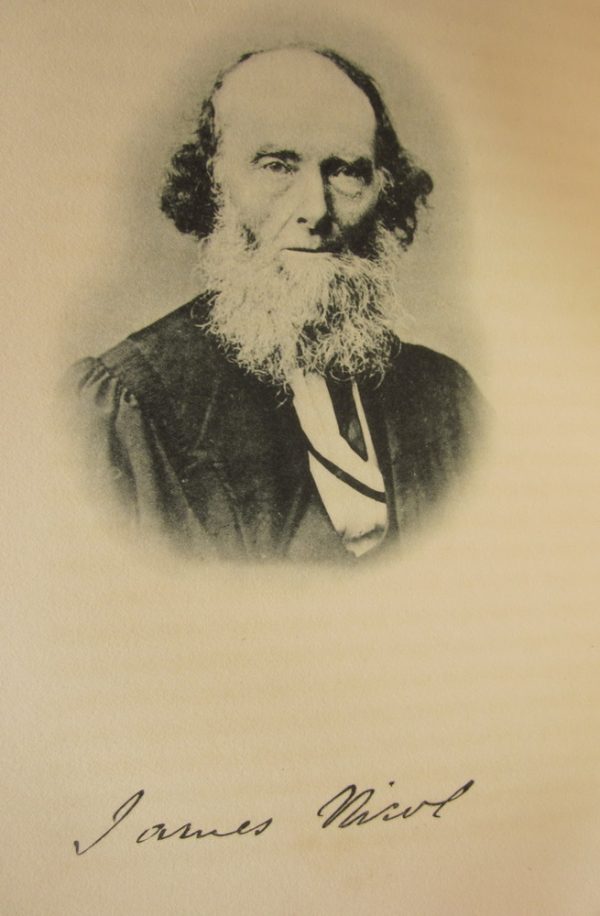 Murchison invited another Scottish geologist, James Nicol, to join him on this expedition. In many ways, Nicol was the opposite of his accomplished and urbane co-traveller. He was described as ‘large of bone, spare of flesh yet not lean … a kindly man withal to look at: but something in the firm straight mouth told of a possible dourness it were better not to provoke.’ Nicol had been appointed to the Chair of Natural History at Aberdeen University in 1853, which meant he was well-placed for exploring the area. Murchison had helped him secure this position, assistance he possibly later regretted, but for now, it was in the spirit of mutual respect that they set off on their journey.

Regrettably, the trip was marred by poor weather, but they still managed to cover a fair amount of ground: from Loch Eriboll to Tongue, thence to Brora, and then back to the west, to Torridon. Inland from the west coast, they found huge areas of gneiss and schist (another metamorphic rock) heaped on top of the sedimentary layers. Murchison suggested that the various layers – gneiss, sandstone, quartzite, limestone, and schist – had been laid down continuously in the order in which they were found (what geologists call a conformable sequence). But how some of the upper layers came to be metamorphosed later, while others below remained unchanged, was yet to be explained.

Nicol, ever his own man, was unwilling to go along with this. He observed that the succession of rocks – what was on the bottom, what was on top – could change repeatedly over a matter of a few yards, which did not suggest an orderly succession. He visited the area again in 1856, after which he presented a paper in which he proposed that the eastern gneiss and schist had somehow been ‘forced over the quartzite.’ Oldroyd, in his classic account of the controversy, points to this as the ‘first hint of thrust faulting in northwest Scotland.’ Clearly, Murchison did not react well: in May 1856, Nicol wrote to him ‘you and I seem to be gradually dropping out of acquaintance.’

Murchison made two more trips to the far north, one with Charles Peach in 1858, and the other with Andrew Ramsay, who at the time was the Survey’s second-in-command. Unlike Nicol, neither of these colleagues found any problem with Murchison’s paradigm. His biographer, Archibald Geikie, states that Sir Roderick liked to do his geology on the move: as he strode around, ‘his eye still kept its wonderful quickness in detecting the really salient features of the geological structures of a district.’ The trouble was that it was only slow, detailed work that was to provide the solution to the question of the succession of rocks in the north-west, and it was to be another twenty years before such work was to begin.

The battle lines were drawn up. After the expedition with Ramsay, the two geologists attended the conference of the British Association for the Advancement of Science at Aberdeen in September 1859. Murchison told the press that he had never seen a ‘clearer order.’ He was sticking to his theory of a conformable sequence with the metamorphic rocks on top. Nicol, meanwhile, in 1858, published a Geological Map of Scotland on which he linked the eastern gneiss to that of the west, and stated categorically in the notes which accompanied the map that he considered all the metamorphic rocks ‘extending from the north coast of Sutherland southwards through Ross-shire and Inverness-shire rather as belonging to an older period.’ In spite of their difference of opinion, he dedicated his map to Sir R.I. Murchison, ‘Director General of the Geological Survey of the United Kingdom. In grateful acknowledgement of his unfailing friendship, and in remembrance of wanderings together in the south, and in the north of our native land.’ 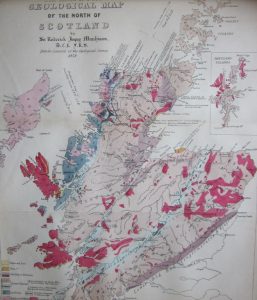 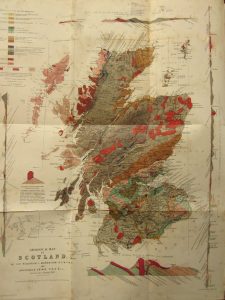 Unfortunately, Murchison’s friendship was anything but unfailing. He had already fallen out with his mentor, Adam Sedgwick, who had accused him of extending his Silurian Empire into Sedgwick’s Cambrian area of interest. Now, Murchison was trying to extend his territory into large areas of the far north. In 1859, he published a significant article in the Journal of the Geological Society of London which spelt out his thoughts on the succession of the rocks of the north-west. He provided sketches of the fossils found at Durness, which indicated that the limestone dated from the Lower Silurian period, and that those above – the quartzite, eastern gneiss, and schist – must also be of Silurian age. He also provided a ‘First Sketch of a New Geological Map of the North of Scotland’ on which huge areas were coloured a light brown, labelled ‘Silurian.’ In support of his paradigm, later editions of Siluria published after 1858 carried a frontispiece of the view from Inchnadamph across Loch Assynt to Quinag, with layers that he called ‘lower quartzite … limestone … upper quartzite’, all labelled ‘Lower Silurian.’ The King of Siluria had now extended his empire beyond the Welsh Marches into the north of Scotland.

Murchison made one last geological trip to the north-west in 1860. His choice of companion this time was unexpected, not least for the invited party. Archibald Geikie was at that time a 25-year-old working at the Scottish branch of the Survey, ambitious but not particularly remarkable. Murchison must have sensed a like spirit in the young man, and in this he was entirely accurate: Geikie rose to great eminence in his field over the next fifty years. Certainly, they bonded well during their expedition, covering a huge amount of ground. At Glen Logan, to the east of Loch Maree, they puzzled over one particular rock that had mystified Nicol as well, and was to trouble geologists for the next twenty years. No one could be certain of its identity, nor of the process that formed it, and it became known as the ‘Logan Rock.’

However, at the end of their tour, Geikie was in no doubt that Murchison’s understanding of the succession of rocks in the north-west was correct. Together they published a new ‘Geological Map of Scotland…’in 1861, which was essentially an enlarged version of Murchison’s 1859 map. Geikie reproduced their map in his book for the layman, titled The Scenery of Scotland, which was published in 1865, and stated therein: ‘A few years ago, these rocks presented a wild chaos of disorder … It was not until 1855 that Sir Roderick Murchison … established the true relations of the rocks of Sutherland and Ross, and obtained the key with which he has revealed the structure of the Scottish Highlands – a discovery the importance of which it is hardly possible to over-estimate.’

By 1865, with Ramsay and the Survey firmly on his side, the matter seemed settled in Sir Roderick’s favour. Geikie, in his biography of Murchison published in 1875, emphasised that ‘the general structure of the Highlands could no longer be considered doubtful. … There was a fitness in the fact, that after wandering far and wide … he should return to his native Highlands and gather his last laurel from the rocks on which he was born.’ It seemed such a neat package, a fitting end to the career of a hugely influential and esteemed figure in 19th century geology. Yet Nicol, and, it seemed, Nicol alone, held onto the doubts which he had expressed shortly after their tour in 1855. How, he continued to ask, could ‘a great mass of strata, resting on unaltered sandstones, and fossiliferous limestones …. have been metamorphosed into gneiss, mica-slate and hornblende rocks?’

For much of the 1860s and 1870s the view adopted by Murchison, and supported by the Survey, held sway in the public domain. Geikie published a Geological Map of Scotland in 1876, and Ramsay, one of Great Britain in 1878. Both indicate that the majority of the rocks in the far north date from the Lower Silurian period, Geikie’s map specifically calling them ‘metamorphosed Lower Silurian of the Highlands.’

Next : Solving The Controversy

Transverse Section across the Assynt Country