Murchison died in 1871, shortly after seeing Geikie settled into the new Chair of Geology at Edinburgh University that he, Murchison, had partly financed. Nicol died eight years later, in 1879, which was unfortunate timing as that was just when the Controversy was flaring up again. However, he must have gained some satisfaction from the visit of another distinguished geologist, James Judd, in 1877. Judd came expecting to support Murchison’s model, but his investigations won him over to Nicol’s arguments.

However, it was in London that the debate re-surfaced, at the instigation not of the professionals, but of the amateurs. In 1874, the railway north from Inverness opened all the way up to Thurso, via Bonar Bridge and Lairg, which made access to the area a good deal easier. From those that came to study the geology, a small group formed whose members felt that the Survey had not provided a satisfactory picture of the far north.

It was a Welsh surgeon, Henry Hicks, who read a paper to the Geological Society of London in 1878. He had spent some time in Ross-shire, and whilst he offered no new findings, he reminded the assembled company that ‘there was no evidence to support the views propounded by Sir R Murchison.’ Another amateur, Wilfred Hudleston decided to review all the theories concerning the geology in the north, which confirmed the impression that the matter had not been settled.

Attention was drawn in particular to Loch Maree, where in Glen Logan the rock that had puzzled Nicol, Murchison and Geikie was still perplexing scientists, both amateur and professional. Even the new discipline of petrography, which employed new technologies such as the microscope to study the composition of rocks, could reveal nothing definite about the Logan Rock. Hicks thought it to be of igneous origin, whilst Thomas Bonney (a keen advocate of petrography) considered it to be altered gneiss. Hudleston simply observed that ‘wherever there is Logan Rock, trouble is sure to ensue,’ and he drew attention to the fact that in the locations where it was found, there was likely to be an upper quartzite band too. No one was more intrigued by the Logan Rock than the wonderfully colourful mineralogist Matthew Forster Heddle, Professor of Chemistry at St Andrew’s University. Famed as much for his mountaineering exploits as for his scientific research, he spent much time at Loch Maree, and said of the Logan Rock that ‘it was the only rock I ever examined in which I found no minerals.’ He published a fine Geological Map of Sutherland in 1882, marking on it in bright green the areas where the Logan Rock was to be found. He labelled it ‘Igneous Rock of the Quartzite’ but suspected it was gneiss, metamorphosed in situ. 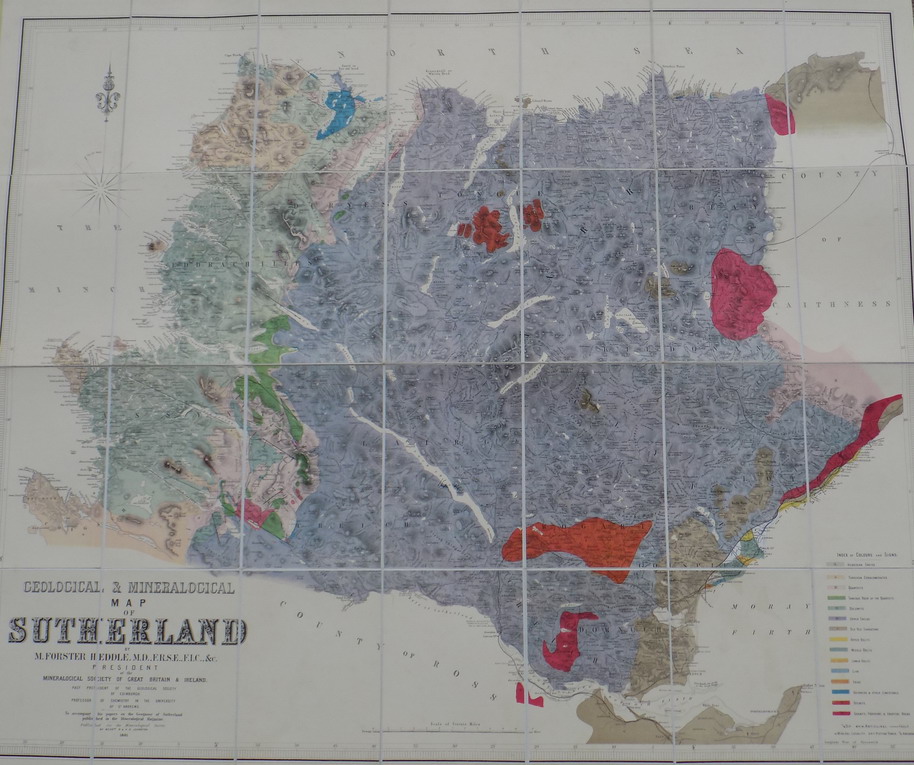 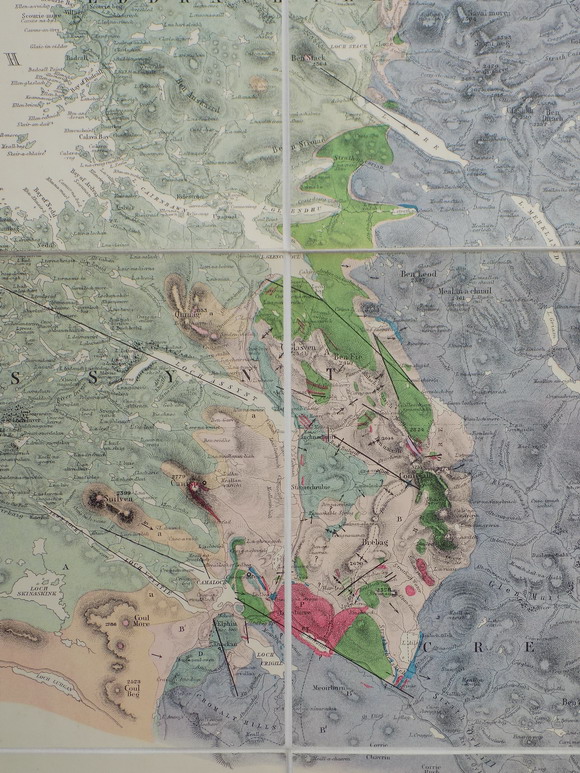 The establishment, in the form of the Geological Survey of the United Kingdom, held firmly to Murchison’s paradigm despite all this new research. Geikie had been steadily working his way up through the ranks in recent years. In 1867, he had been appointed Director of the Scottish Branch of the Geological Survey when it became separate to that of England, and in 1881 he succeeded Ramsay to become Director General of the entire Survey. On the ground, the Survey had gradually been inching its way northwards through Scotland, and would soon be reaching Ross-shire and Sutherland. Its journey had not been without serious hiccoughs: in 1878 a certain Charles Lapworth, a teacher based in Galashiels, exposed serious errors in the Survey’s interpretation of the geology of the Southern Uplands, which then later had to be re-surveyed.

Geikie made three trips to the north-west in 1880-1881, on the first of these, taking with him Edward Hull, the Director of the Irish branch of the Survey. The suspicion is that Geikie did not take him to the more contentious areas. In fact, Geikie did not visit Loch Maree on any of his three trips. It comes as no surprise then to find that Hull remained fully behind the Survey’s position, stating that he thought Murchison’s views would ‘never be invalidated.’

The defining moment for the Controversy came on May 9th, 1883, when Charles Callaway read a remarkable paper to the Geological Society, the contents of which sounded the death knell for Murchison’s, and the Survey’s model. Callaway was one of the first students in this country to graduate with a degree in geology. He visited the north-west during the summer months, 1880 – 1882. His paper was a model of respect. ‘I hesitate’ he stated early on, ‘to reject the testimony of such competent observers as Murchison [and Charles] Peach….’. Yet his careful research, whilst not actually providing a definitive solution, completely demolished the paradigm to which Murchison and Geikie had clung from the very beginning of the Controversy. His paper rejected totally Murchison’s treasured theory of upper and lower bands of quartzite, and instead introduced evidence of remarkable S-shaped structures, of rocks crushed and altered, and of distorted worm burrows in the pipe rock, all of which suggested huge lateral forces which were completely new to British geology.

Charles Lapworth arrived on the north coast in early August 1882. Like others before him, he tried to find fossils in the Durness limestone, and failed. He then moved on to the eastern shores of Loch Eriboll, and from his base in a shepherd’s hut in Heilam, carried out an exhaustive examination of the rocks he found there. He needed as much detail as he could gather from each of the different bands of rock types. He noticed, for example, that the limestones were grey and mottled at the top of the series, dark and flaggy in the middle, and fossiliferous, with shells and salterella at the bottom. Even within the narrow fucoid beds, he found an upper band of dark blue shale, while he could divide the quartzite into four layers, with pipe rock at the top. This was the detailed work that was needed, that none of the earlier geologists had carried out. Armed with the sub-divisions, Lapworth was able to see not only which rock type was where, but also whether it was the right way up, turning over, or upside down. It was exhausting work, which he told Bonney he carried out ‘night and day.’ The area he concentrated on included Ben Arnaboll, and the lonely expanse out towards Whiten Head.

Lapworth returned to the area in 1883, and felt able to publish his findings in the 1883-4 Proceedings of the Geological Association. Put at its simplest by John Horne in the 1907 Survey Memoir, Lapworth ‘believed that the Highlands of Scotland include a portion of an old mountain system, formed of a complex of rock-formations of very different geological ages, which have been crushed and crumpled together by excessive lateral pressure, locally inverted, profoundly dislocated, and partially metamorphosed.’ Lapworth himself was rather more descriptive of this process: ‘Conceive a vast rolling and crushing mill of irresistible power, but of locally varying intensity, acting not parallel with the bedding but obliquely thereto; and you can follow the several stages in imagination yourself … Shale, limestone, quartzite granite and the most intractable gneisses crumple up like putty in the terrible grip of this earth machine – and all are finally flattened into thin sheets of uniform lamination and texture.’

These new sheets are of a rock called mylonite, and they can be found in areas where the crushing and pulverising was most intense. In the vicinity of Ben Arnaboll, Lapworth found two major thrust planes. One, the Ben Arnaboll thrust, brought the ancient gneiss over sedimentary layers. The other, the Moine thrust, brought the Moine Schists over from the east for a distance of at least ten miles. And what of the Logan Rock, which had puzzled so many investigators? This is now thought to have been ancient gneiss, so crushed and pulverized at the thrust as to be unrecognisable.

Lapworth sections, as seen from the Loch Eriboll to Tongue Road 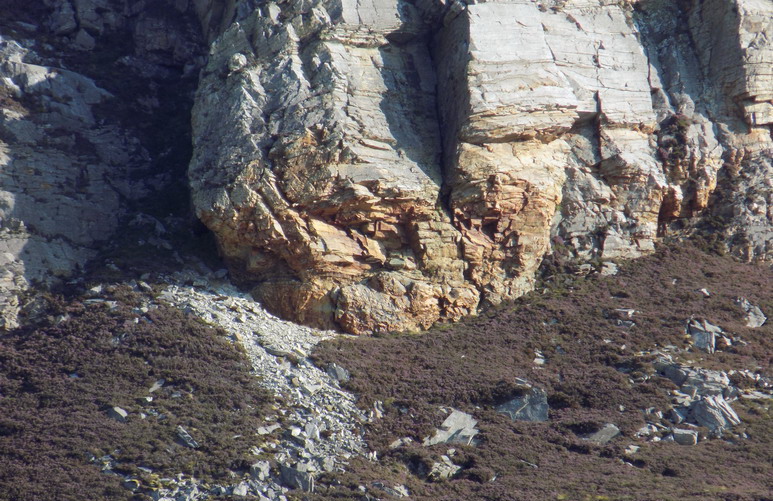 Such was the intensity of the work he undertook that Lapworth suffered some sort of breakdown soon after he had finished. According to Sir Edward Bailey, he felt ‘the great Moine nappe grating over his body as he lay tossing on his bed at night.’ It was left to his colleagues to present the case for his model to the Survey, and in particular to its Director General, Sir Archibald Geikie.

It was the Survey’s own professional surveyors who led Geikie in 1884 to areas that strongly suggested that the Murchison model was wrong. Geikie was not a man to show weakness, but Lapworth was told that ‘his aspect after yielding seems to have been pitiable.’ However, yield he did, though he showed extreme reluctance to give credit where credit was due. He chose Nature magazine, and not Survey publications, in which to announce the new findings, and sought to imply that it was the Survey that had reached these conclusions. At no time did he mention Callaway, nor Lapworth – the reminder of the latter’s involvement in the Southern Uplands debacle rubbed yet more salt into his wounds.

The amateurs were furious, but one could argue that it was Geikie’s job to protect the integrity of the Survey. That integrity was protected further by the superb work of the Survey team as they picked their way over Sutherland and Ross-shire. The names of the two team-leaders, Ben Peach and John Horne, are the stuff of geological legend. You can today ‘meet’ them at Knockan Crag, and if you press the button, they will tell you of their exploits. A memorial to them was erected in 1930; it looks out over Loch Assynt towards Quinag – exactly the view Murchison chose as his frontispiece for Siluria. But perhaps the best monument to the pair are the maps they left for posterity. Nothing shows better the complexity of the task they accomplished.

The Frontispiece to Murchison’s Siluria 1859 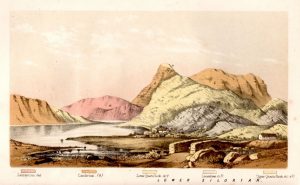 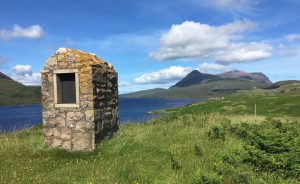 Next : Impact and Significance

1891 Geological Survey of Assynt around Inchnadamph

Interactive Historical Geology Maps from the National Library of Scotland

Explore early Geology maps as you move through the landscape of the North West Highlands Geopark. This link to the National Library of Scotland website overlays the 1860 to 1940 one inch geological maps with satellite imagery so that you can move between each layer by altering the transparency level to see how the geological features appear in the landscape.

1860 to 1940 Geology Maps of the North West Highlands Geopark