The Geology Of Quinag : The Rocks

What we see as Quinag today can be likened to a theatre production. The geology is the stage and auditorium on which all else is built. The audience and actors may come and go but the foundation of the geology remains.

Section A: The Rock of Quinag

What is now Quinag has been sculpted from a much thicker pile of rock than we see today. This pile of rock records an amazing story which is told in the following section. Just over 400 million years ago it lay immediately west and partially under the edge of a major fold mountain belt, as it formed. This happened due the collision of one big continent with another. What has now become Scotland was part of one of these big continents and what became England and Wales part of another. In this mountain belt, which has been called the Caledonian, the rock was squeezed and pushed up and over the rocks that now make Quinag. The collision resulted in the death of a substantial ocean that once lay between these continents, over 400 million years ago.

The rocks that form Quinag were made by a variety of processes, but all are formed from minerals, containing different elements. As the minerals are exposed at the surface they weather and release these elements, which then become available as nutrients for the plants. Often the available nutrients control what plants can grow and here today some nutrients are limited in their availability.

There are three main rock groups within the boundary of the John Muir Trust estate, with others from the old fold mountain belt coming right up to that eastern boundary, the A894 road (and sometimes just further west into the estate by a few metres). At one time these heavily faulted rocks to the east of the road used to slope right up and over Quinag, before erosion removed them to the current level.

The maps below show the distribution of the three main rock groups at the surface at the present day.

All three rock groups can be seen here. The Lewisian has parallel narrow intrusions (dykes) running through and a small area can be seen sticking up through the Torridonian at the bottom just right of centre of the map. The Lewisian down in the right corner is caught up in the faulting associated with mountain building and is pushed up and over quartzite. The three different divisions of the Torridonian can be seen and a small outcrop of quartzite is right at the top of one of the summits of Quinag (bottom centre).

Loch Assynt is at the bottom of the map (marked incorrectly as Loch Awe!). The road runs along the eastern edge of the map and west of the rocks faulted in the mountain belt (multiple-coloured stripes). On the south part of Quinag the quartzites can be seen running up to the most southerly of the summits.

1. Lewisian Gneiss (pink with green and blue stripes on the map)

The Lewisian is at the bottom of the rock pile and is named from the Isle of Lewis, which is mostly made of it and gneiss is its rock name. This is quite a varied metamorphic rock type with light layers, mostly of the minerals quartz and feldspar, and dark layers of pyroxene and amphiboles. These layers alternate on scales from a few millimetres to several metres and are intruded in some places by unlayered vertical sheets (dykes) of dark rock (green and blue on the map) with the minerals: pyroxene, amphibole and feldspar. Quartz in the light layers doesn’t really weather at all, feldspar does weather, but doesn’t release much in the way of nutrients. In the dark layers, the dark green/black minerals of pyroxene and amphibole weather more easily, releasing nutrients from their varied chemistry. Elements such as iron, magnesium, calcium, potassium and sodium are released.

The gneiss doesn’t split along the layering very easily, hence it acts as a mass of rock which takes a long time to be worn down and hence tends to form low rounded rolling hills. It will not allow water to penetrate, so it remains on the surface as burns and lochans which form in any hollows in that surface. Boggy ground is common, in which peat may form.

2. Torridonian Sandstone (yellow, brown and khaki on the map)

The Torridonian is named from Torridon, where it forms the bulk of the hills. It is mostly made of unaltered sand grains, pebbles and a few layers of mud, and hence is a sedimentary rock. It has an irregular base, as it was deposited on an undulating land surface made of Lewisian. Most of the sand grains are quartz or pink feldspar. Within the lower layers pebbles formed from the local gneiss, but higher up are some pebbles that have travelled long distances in river systems and are made of a range of rock types. The minerals that cement the grains together include oxides of iron, hence the overall red colour of the rock. Some of the pebbles in it, and the mudstones, may release nutrients but the bulk of the sand grains do not.

The Torridonian is in layers of slightly different compositions (shown in yellow, brown and khaki on the map), which tend to break along the layers that the sediment was originally deposited in, and at right angles to them. That means that these layers tend to form ledges and blocks will come out fairly easily when rivers and ice erode them. They do let some water down the cracks between the blocks and along the layers, especially if on hillsides above the water table, but form boggy ground on low lying land.

Above (Figure 5) can be seen the boundary (unconformity) between the bent layers of steeply sloping Lewisian Gneiss and the overlying Torridonian. Below (Figure 6), the contact can be seen over a longer distance. The person in the blue helmet in the top right is standing on the join between the Lewisian and Torridonian. This used to be a land surface 1000 million years ago.

3. Cambrian Quartzite (dark and light grey on the map)

Cambrian is a period of geological time and quartzite is a sandstone with quartz grains and quartz cement holding the grains together. It is a very hard rock that doesn’t weather easily and has no nutrients to release. The upper part is referred to as the pipe rock, as it has vertical fossil burrows, whereas the lower part has very little evidence of life. As it is so hard and doesn’t weather easily, it tends to keep the polished surface as it was when the glaciers, with rocks in the base, last scoured it.

The rock doesn’t let water through except down the fine vertical cracks at right angles to the layers it was formed in. Its base is very planar and made of layers which slope at about 15 degrees to the east, unlike the Torridonian where the layers are almost horizontal. 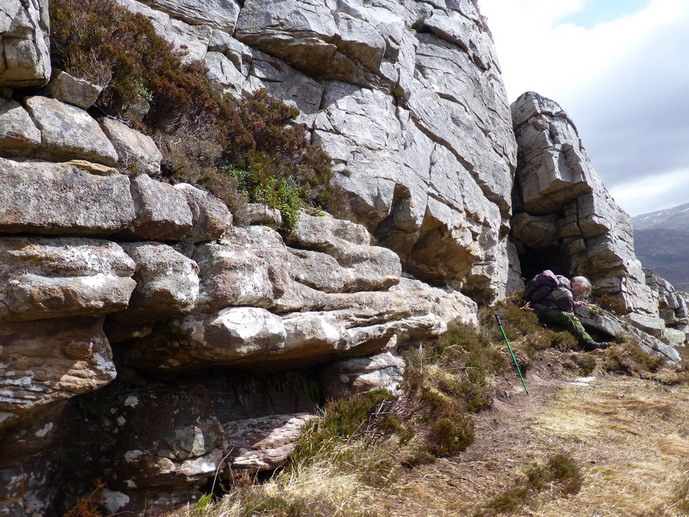 It is quite difficult to be able to think about the relationships between the three main rock groups from just a map. The British Geological Survey have an online viewer for maps https://mapapps.bgs.ac.uk/geologyofbritain/home.html. Thanks go to them for allowing their reproduction here and also three-dimensional models http://mapapps.bgs.ac.uk/geologyofbritain3d/. Both allow the user to manipulate what is being looked at. Those below may help you to build and retain a model when considering how Quinag has developed.

The Overall Structure of Quinag

Quinag is an island of mostly Torridonian Sandstone, sitting on an irregular surface of Lewisian, with a layer of quartzite sloping east. The image below, which looks north, shows the irregular surface of the Lewisian (pink, green and blue), which passes under Quinag. On top of that is a wedge shape of Torridonian (yellow, brown and khaki) which thins eastward. Looking north the quartzite can be seen sitting directly on the Lewisian, the Torridonian has wedged out completely as east of Quinag all of the Torridonian had been eroded before the quartzite was deposited.

East of the quartzite can be seen the light blue and brown of the higher Cambrian rocks and more Lewisian, both of which have been caught up in the Caledonian mountain building. Before the deep erosion, both these and the quartzite sloped up and over the top of Quinag and further west still. Remember in total 6-10 kilometres of rock have been removed. The south summit still has much of its quartzite remaining, the one further north just a small cap left following the erosion.

The Geology Of Quinag – Section B: The Story Recorded In The Rocks