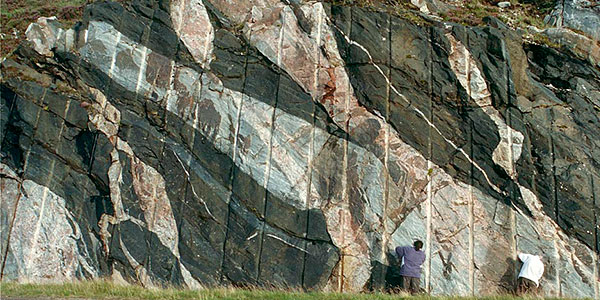 The Highlands Controversy unfolded during the mid to late 19th century when the early geologists began to study the rocks of the Northwest Highlands of Scotland. Initial surveys carried out by the official Geological Survey led by Roderick Murchison and Archibald Geikie began to be questioned by ‘amateur’ geologists who had discovered a number inconsistencies where rocks appeared out of sequence in the rock strata.

These discoveries meant that for most of the second half of the 19th century the Northwest Highlands became a great focus for many geologists as they sought to carefully map the region and explain the forces involved in creating the landscape they saw. The disagreements between the amateurs and the Geological Survey finally came to a head in the 1880’s resulting in the Geological Survey sending up a dedicated team to resolve the issue once and for all. Their findings validated the work of the amateurs and led to the discovery of thrust faults.

This Geotour aims to follow in the footsteps of these pioneering geologists such as Roderick Murchison, Archibald Geikie, Matthew Heddle, James Nicol, Charles Lapworth, Ben Peach and John Horne amongst others by visiting the locations where they gathered their evidence. You will be accompanied by the Northwest Highlands Geopark Geologist Pete Harrison who will take you through the events as they unfolded and provide expert tuition on the various rock types to help you interpret the landscape.  Pete Harrison has recently co-authored (with Malcolm Rider) the 2nd Edition of Hutton’s Arse which explores the Highlands Controversy as well as looking at 3 billion years of extraordinary geology in the Northern Highlands.

The tour has been designed to appeal to those who may have undertaken a previous Geotour or have some previous knowledge or field experience. It will look at the structure and geological history of the Moine Thrust Zone in particular and how the theory of its formation gradually evolved over 50 years.

Also included in the tour is a talk from Alastair Mitchell who will take you through his collection of original maps produced around the time of the controversy, to show how the ideas developed.

Read The Full Story Of  The Highlands Controversy 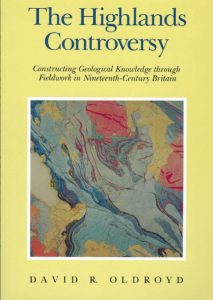 Everyone meets in Ullapool at the Macphail Centre on Saturday evening at 7.00pm for introductions and an initial briefing.

First of two days in Assynt where we will initially stop off at Knockan Crag where the succession of rocks is clearly visible and so you can familiarise yourself with the various rock types associated with the area.  We will then move onto the Moine Thrust Zone at Loch Assynt before completing the day at the Rock Stop visitor centre where further evidence of thrust faulting is clearly visible in the landscape around Loch Glencoul.

For the second day in Assynt we will be looking at one of Roderick Murchison’s favourite sections as we walk up through the succession at Cnoc an Droighinn near the Peach and Horne monument at Inchnadamph.  We will spend the day here gradually walking up to 1200 feet crossing strata formed by complex thrust movements and various igneous intrusions.

A longer day travelling across the Geopark to the north coast at Durness and Loch Eriboll.  This was a key location in the controversy and where one of the amateur geologists Charles Lapworth identified exposures of thrust faulting at Ben Arnabol.  We will also be looking at further evidence of the Moine Thrust Zone and discovering how rocks are affected along thrust fault planes to create mylonites.

A day spent around Loch Broom examining the effects of the Ullapool and Moine Thrusts on the surrounding landscape.   This is an area that was carefully studied by James Nicol and later by Archibald Geikie who found some disagreement with James Nicol’s findings.

On the final day we travel to Kinlochewe to take a low level walk up Glen Logan.   We will look at how the Moine Thrust zone has affected the local rocks and discover the famous ‘Logan Rock’ which was first described by mineralologist Matthew Heddle and later documented on his 1882 map of Sutherland as ‘the igneous rock of the quartzite’.  This is a key locality in the debate and was examined by all of the main contributors.

Next Tour Dates to be confirmed

The cost  is £235 with a £12  early bird discount if booked before the end of April and a further £12 discount is available to all Friends Of The Geopark.  A £50 deposit is required when booking and the fee includes transport and tuition.

It is recommended that accommodation be booked promptly as it can be in short supply at that time of the year. If sufficient participants wish, self catering could be booked to share. This can be discussed and coordinated on booking.

For more information or to book your place on the tour please contact Pete Harrison by email at pete@nwhgeopark.com

Find out more about becoming a  Friend Of The Geopark