Rob Butler, Professor of Tectonics from the University of Aberdeen, hosts a zoom talk on Discovering the Moine Thrust.

The Moine Thrust is a ancient fault zone that runs down NW Scotland – one of the most famous tectonic structures in the World. It has been recognised by UNESCO in their top one hundred global geosites – for its importance in the history of science and for its geological significance. But its discovery back in the 1880s pitted Victorian scientists against each other who challenged each other’s evidence, observations and even basic competence. 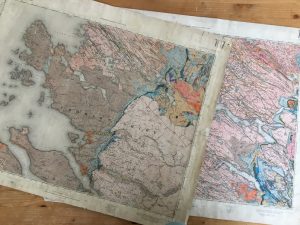 We can follow the history, see examples of the scientific documents, the maps and notebook sketches, to reconstruct the debates – and how the World’s first detailed mapping of complex geological structure was completed – activities that provide the scientific underpinnings of the NW Highlands Geopark.

Register for the zoom talk – Discovering the Moine Thrust